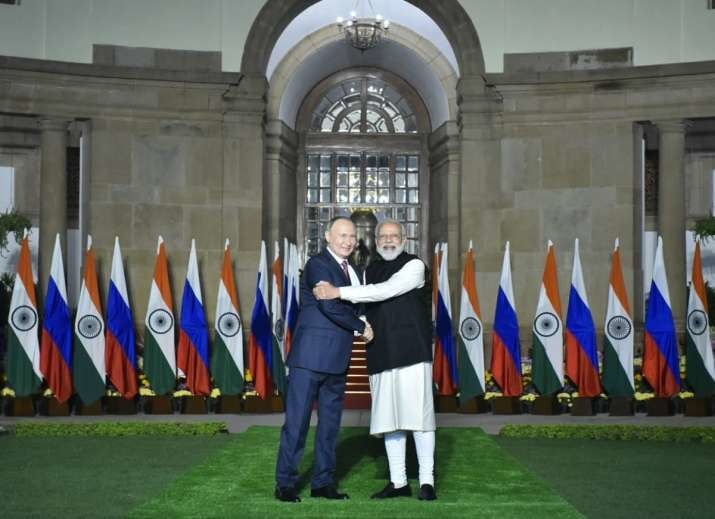 AKIPRESS.COM - Indian Prime Minister Narendra Modi welcomed Russian President Vladimir Putin on his brief visit to India on Monday saying its a reflection of the latter's commitment to ties with India. This is Putin's second overseas trip since the Covid pandemic began, Business Standard reported.

PM Modi and President Putin on Monday held the 21st India-Russia summit in Delhi, covering an array of areas with an aim to further enhance the special and privileged strategic partnership between the two countries.

In his initial remarks, Modi said there is no change in the pace of relations between India and Russia despite the COVID-19 pandemic. "Your visit to India is a reflection of your commitment to ties with India," the prime minister said.

Modi said the special and privileged strategic partnership between the two sides was getting stronger and both sides remained in touch on the situation in Afghanistan and other issues.

In the last few decades, the world witnessed many fundamental changes and different kinds of geopolitical equations and variables, but the friendship of India and Russia remained constant, Modi said.

The summit talks took place hours after the foreign and defence ministers of the two countries held their inaugural '2+2' dialogue with an aim to widen the ambit of discussions on strategically important issues.

"We are certainly worried about everything related to terrorism and the fight against it. Terrorism is also fight against drug trafficking and organized crime. In this regard, we cannot but worry about the situation and how it is developing in Afghanistan," Putin said at the Hyderabad House, where both the leaders met.

Speaking about the ties between the two nations, the Russian President said: "We perceive India as a great power, a friendly nation, and a time-tested friend. The relations between our nations are growing and I am looking into the future," he added.

This is the first in-person meeting between the two leaders since they met on the sidelines of the BRICS summit in 2019 in Brasilia. There have been six telephonic conversations between Modi and Putin since then apart from the virtual meetings that they've attended for multilateral summits.

The visit is in continuation of the tradition of annual summits held alternately in India and Russia. The day began with Indian Defence Minister Rajnath Singh's talks with his Russian counterpart Sergey Shoygu under the framework of the India-Russia Inter-Governmental Commission on Military-Technical Cooperation.

At the end of the talks between the defence ministers, both sides signed an agreement for joint production of over 600,000 AK-203 assault rifles at a manufacturing facility in Uttar Pradesh's Amethi besides firming up another pact on military cooperation for 10 years, from 2021-2031.

The rifles will be manufactured for the Indian armed forces at a cost of around Rs 5,000 crore. The agreements were signed at the 20th meeting of the India-Russia Inter-Governmental Commission on Military and Military-Technical Cooperation (IRIGC-M&MTC).

Russian Foreign Minister Sergey Lavrov while speaking to media said that S-400 deal doesn't have only a symbolic meaning. It has a very important practical meaning for the Indian defence capability. Our Indian friends clearly and firmly explained that they are a sovereign country and they will decide whose weapons to buy and who is going to be a partner of India in this and other areas, Lavrov added.

Harsh Vardhan Shringla, India’s Foreign Secretary said that President Putin's visit is short but highly productive and substantive. There were excellent discussions between the two leaders. 28 agreements/MoUs were concluded during this visit. These agreements include those between G2G and B2B, Shringla added.

Enhancing bilateral trade and investment figured prominently in the talks. This year, we've noticed an encouraging trend of growth in our trades compared to last year. Both sides are looking forward to continued increase in trade and investment trajectory, said Shringla.