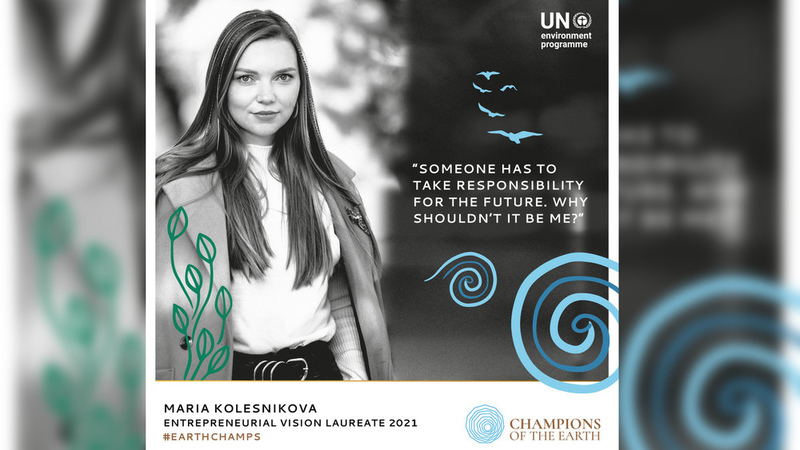 MoveGreen developed an app, now available globally, called AQ.kg a real-time collector and transmitter of actionable data about air quality. The application aggregates data every 20 minutes from the two largest Kyrgyz cities, Bishkek and Osh, about the concentration of pollutants in the air, ​including the tiny particle PM2.5 and its larger cousin, PM10.

“Our data has been challenged, our methods have been challenged – by those who say that citizen monitoring data is unreliable,” said Maria Kolesnikova. “But we kept having meetings and we kept going back and now, they listen. The result of our work has been in connection with the government, to improve environmental monitoring in Bishkek, to do a better job of monitoring and reducing emissions.”

“Kolesnikova’s work reflects how individuals and citizens can drive environmental change by leveraging the power of science and data”, said Inger Andersen Executive Director of the United Nations Environment Programme. “So often, people wonder if there’s anything they can do to combat pollution, climate change and the other threats to the planet. Maria Kolesnikova proves that there is. Her dedication is remarkable and shows that we can all play a role in putting the planet on the path to a better future.”

MoveGreen’s plans in the coming months include calling for policies at the municipal and national level to develop bills that require regular public information sessions about the results of air quality measurements. The Kyrgyz Republic has committed to global targets to fight climate change, including an unconditional goal of reducing Green House Gas emissions by over 16 per cent by 2025.

Because air pollution has no borders, Kolesnikova and MoveGreen are entering into regional arrangements with other Central Asian countries. Her goal is to convince the region’s six states to collaborate on ways to tackle air pollution in their growing cities. Putting in place systems and standards to assess air quality will be critical. A recent UNEP study found that only 57 countries continuously monitor air quality, while 104 have no monitoring infrastructure in place.