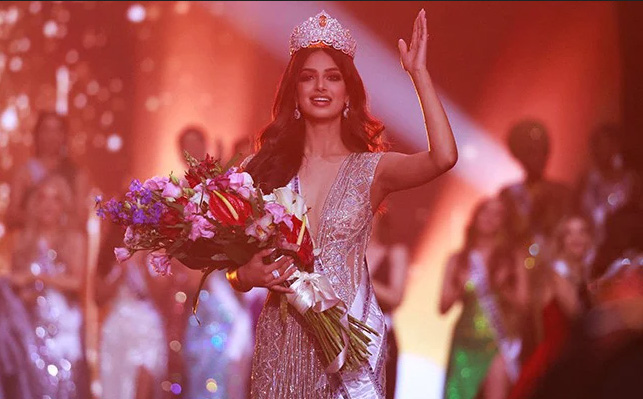 Nadia Ferreira of Paraguay was named the first runner-up, while Lalela Mswane of South Africa rounded out the top three in the final round of the Miss Universe pageant.

On being asked what advice she would give to young women on how to deal with the pressures they face, a composed Ms Sandhu said, "The biggest pressure the youth of today facing is to believe in themselves, to know that you are unique and that's what makes you beautiful. Stop comparing yourselves with others and let's talk about more important things that's happening worldwide.”

"This is what you need to understand. Come out, speak for yourselves because you are the leader of your life, you are the voice of your own. I believed in myself and that's why I am standing here today," Ms Sandhu said with aplomb.

Harnaaz Sandhu, the new Miss Universe, dedicated her win to India hours after winning the title at the 70th edition of the event held in Israel's Eilat. She became the third Indian to win the Miss Universe title, after Sushmita Sen in 1994 and Lara Dutta in 2000.

"India, this one's for you," Ms Sandhu posted on Instagram hours after her historic win. In separate posts, the model from Chandigarh also gave a shout-out to her family, designers and panelists.

"It has never been my journey, it has been Our journey. I began with baby steps and as I come closer to the end, I wish to thank all my panelists for being an integral part of my learning. I thank my designers for making me shine at the pageant. Thank you for moulding me into the girl you see on stage today,” Harnaaz Sandhu wrote on Instagram.

Ms Sandhu started her journey in pageantry when she won Times Fresh Face in 2017, representing Chandigarh at the age of 17. She later won the LIVA Miss Diva Universe 2021 title.

She has also starred in some Punjabi movies, including "Yaara Diyan Poo Baran" and "Bai Ji Kuttange”.

Sushmita Sen, the first Indian to win the Miss Universe title, congratulated Harnaaz Sandhu and called her win a matter of pride for every Indian.

Lara Dutta while congratulating her win tweeted that “Welcome to the club, We’ve waited 21 long years for this, A billion dreams come true”

Harnaaz Sandhu will now move to New York City where she will live during her reign and become a spokesperson for various causes alongside the Miss Universe Organisation.