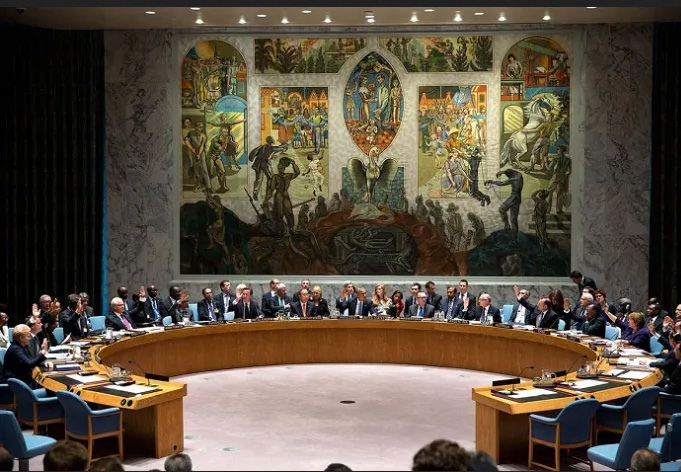 AKIPRESS.COM - India on Monday voted against a UN Security Council draft resolution that linked climate change with global security challenges as it argued that the move attempts to undermine the hard-won consensus reached at the recently concluded Glasgow Summit, Business Standard reported.

"India is second to none when it comes to climate action and climate justice, but the Security Council is not a place to discuss either issue. In fact, the attempt to do so appears to be motivated by a desire to evade responsibility in the appropriate forum and divert the world's attention from an unwillingness to deliver where it counts, India's Permanent Representative to the United Nations said.

"Today's UNSC Resolution attempts to undermine the hard-won consensus which we reached in Glasgow. This resolution would only sow the seeds of discord among the larger UN membership, he told members of the UN Security Council explaining the country's decision to vote against a draft resolution in this powerful 15-member body of the United Nations.

Negotiators from nearly 200 countries accepted a new climate agreement after the COP26 summit in Glasgow last month, which recognises India's intervention for the world to "phase down" rather than "phase out" fossil fuels.

India and Russia were the only countries to have opposed the draft resolution, which was vetoed by Russia, a permanent member of the UN Security Council, while China abstained.

Voting against the resolution, India said there should be no confusion about India's determination to combat climate change.

"We will always support real climate action and serious climate justice. We will always speak up for the interests of the developing world, including Africa and the Sahel region. And we will do so at the right place the UNFCCC, Indian Representative said.

The resolution, he asserted, sends a wrong message to the developing countries that instead of addressing their concerns and holding developed countries responsible for meeting their commitments under the UNFCCC, we are willing to be divided and side-tracked under the guise of security. This resolution is a step backward from our collective resolve to combat climate change.

It seeks to hand over that responsibility to a body which neither works through consensus nor is reflective of the interests of the developing countries, he added. "India had no option but to vote against the resolution, he said.

Climate change decisions are sought to be taken out of the wider international community represented in the UNFCCC and given instead to the Security Council, he said.

"Ironically, many of the UNSC members are the main contributors of climate change due to historical emissions. If the Security Council indeed takes over the responsibility on this issue, a few states will then have a free-hand in deciding on all climate-related issues. This is clearly neither desirable nor acceptable, the senior Indian diplomat said.

"We recognise the fact that climate change has impacted the lives of people and may have even exacerbated conflicts in Sahel and other parts of Africa. India remains committed to peace, security and development in Africa and the Sahel region, both bilaterally and in the UN, he said.

"To move forward decisively, affordable access to climate finance is critical. Developed countries must provide climate finance of USD 1 trillion at the earliest," he said.

It is necessary that climate finance be tracked with the same diligence as climate mitigation and the reality, he said, adding that the developed countries have fallen well short of their promise.

"This is particularly important to recognise because today's attempt to link climate with security really seeks to obfuscate lack of progress on critical issues under the UNFCCC (United Nations Framework Convention on Climate Change) process, he said.

The Indian envoy also voiced concern on the manner in which this issue was brought before the Security Council.

"Over the last nearly three decades all member-states have negotiated collectively and with consensus an elaborate and equitable architecture to combat every aspect of climate change; while arriving at a far-reaching consensual decision we have tried to accommodate each other's interests and specific national circumstances. This comprehensive process has in fact been done under the UN-led UNFCCC with participation of all member states, he said.

The UNFCCC has been, in turn, informed by members' priorities. It addresses both the immediate needs of the developing and the commitments of the developed. It seeks a balance between mitigation, adaptation, financing, technology transfer capacity building, etc. In effect, it takes a holistic view of combating climate change which is equitable and fair, he said.

"We, therefore, need to ask ourselves: what is it that we can collectively do under this draft resolution which we cannot achieve under the UNFCCC process? Why is it that one needs a UN Security Council resolution to take action on climate change when we have commitments made under the UNFCCC towards concrete climate action? he said.

He added that the honest answer is that there is no real requirement for this resolution except for the purpose of bringing climate change under the ambit of the Security Council and the reason for that is now decisions can be taken without involvement of most developing countries and without recognising consensus.

"And all this can be done in the name of preserving international peace and security, he said.