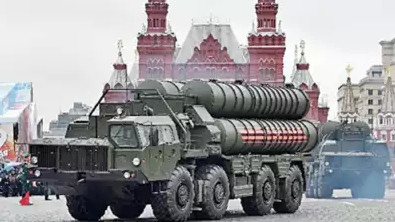 Arguing that the Biden Administration should resist from any action that might drive New Delhi away from Quad, a top Republican senator supported waiving of CAATSA sanctions against India for purchase of S-400 missile systems from Russia.

India, Senator Todd Young said, is currently taking delivery of the Russian S-400 system. The country is also in the process of acquiring new frigate ships from Russia. "Both are important systems for the Indians," he said on January 12 during a confirmation hearing for James O'Brien for the position of the State Department coordinator for Sanctions Policy.

"India is a vital ally in our competition against China, and thus, I believe we should resist taking any actions that might drive them away from us and the Quad. I am therefore strongly supportive of waiving CAATSA sanctions against India, given our shared foreign policy interests," Senator Young said.

"As most here know, the Indians have a lot of legacy systems from previous decades, and they are interoperable with the Russians' systems. And the Indians seek to defend their land border from Chinese incursions and defend the Indian Ocean from an increasingly adventurous and lawless blue ocean navy," he said.

The Indiana senator asked O'Brien if the US experience with Turkey provided any warning or lessons on how to proceed with India.

"I believe they are very different circumstances, and, of course, different security partnerships -- but how do you believe we should think about the possibility of sanctioning our friends and not just threats," he asked.

In response, O'Brien said it is difficult to compare the two situations, with a NATO ally that is breaking with legacy defence procurement systems, and then with India, a partner of growing importance, but that has legacy relationships with Russia.

"The administration has made clear that it is discouraging India from proceeding with the acquisitions of Russian equipment, and there are important geostrategic considerations, particularly with (unintelligible) relationship to China. So, I think we have to look at what the balance is. And, of course, India's got some decisions in front of it, so it would be premature to say more. But this is something I look forward to working with you and other interested members," O'Brien said.

India signed a $ 5 billion deal with Russia to buy five units of the S-400 air defence missile systems, despite a warning from the then Trump administration that going ahead with the contract may invite US sanctions. Delivery of the systems began late last year.