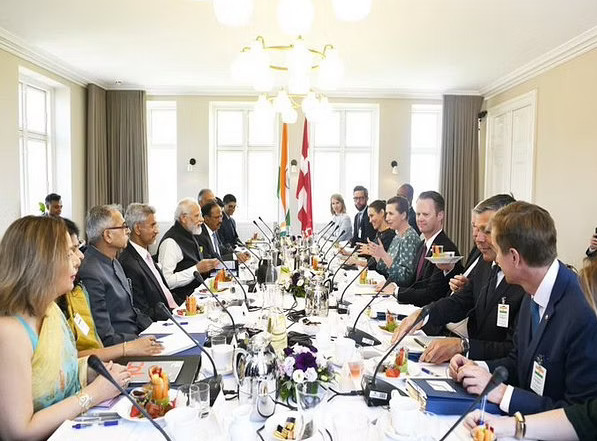 According to India’s Ministry of External Affairs, the nine agreements cover development of Ports, Shipping and Waterways, on Centre of Excellence in Green Shipping, Skill Development, Animal Husbandry & Dairying, and Launch of Energy Policy Dialogue at Ministerial level.

both sides also signed agreements on India to join as mission partner to ICARS (International Centre for Anti-Microbial Resistance Solution).

PM Modi and his Danish counterpart Frederiksen discussed the progress in the green strategic partnership and agreed to deepen cooperation on renewable energy sources and environmental security during talks in Copenhagen on Tuesday.

“We share many values. We are two democratic nations, we both believe in a rule-based international system. In times such as these, we need to build an even stronger bridge between us. As close partners, we also discussed the war in Ukraine,” Danish PM Frederiksen said.

Addressing the members of the Indian community in the presence of PM Narendra Modi, Danish PM Frederiksen said, “I truly hope and believe that this green strategic partnership will bring Denmark and India even closer and together.”

The Danish PM said that this partnership will bring green jobs and new opportunities for all the countries. She also said, “I would also like to say that two years ago, PM Modi and I agreed on a strategic partnership, first of its kind for both of our countries. it is very amazing for a small country like Denmark, that we are the first country to have a strategic partnership with great India and by joining hands and minds we aim to find new ways forward.”

In particular, the prime ministers shared convergence of interest on the importance of climate action, green growth and the development of renewable energy sources.

“The two leaders agreed to further strengthen their cooperation within the renewable energy sector and welcomed the work on a comprehensive Energy Policy Dialogue in India and Denmark especially strengthening cooperation on cross-sectoral energy planning with a focus on green hydrogen, integration of renewable energy, energy storage and decarbonisation,” the statement read.

PM Modi and Frederiksen also welcomed the initiative to continue research and development activities in the field of green hydrogen and cleaner fuels. The prime ministers listed the targeted areas with regard to green fuels for transport and industry, where there is no cost-effective alternative to fossil energy.

The two prime ministers agreed to maintain regular high-level interactions in the run-up to the 75th anniversary of bilateral relations in 2024 and agreed to commemorate it in a befitting manner.

PM Modi after visiting Berlin, reached Danish capital on Tuesday for bilateral meeting with his Denmark counterpart as well as to attend India-Nordic summit. The tour is aimed at strengthening bilateral relations with key European countries in a number of important areas.