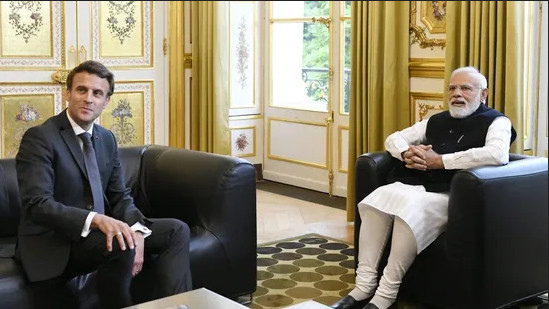 Modi's Paris visit focused on French support for Aatmanirbhar Bharat (self-reliant India) across sectors, including defence and space, besides joint efforts in the Indo-Pacific region.

PM Modi on Thursday thanked President Macron and the French government for the “warm hospitality”. Mentioning that his visit to France was “brief but a very fruitful one”, PM Modi said that the two leaders spoke on various subjects, including “bilateral as well as global issues". Modi further added that “India and France are proud developmental partners” with their partnership being “spread across different sectors”.

The French president also took to Twitter and shared the topics of discussions with PM Modi. “Tonight, with @NarendraModi, we discussed the different ongoing international crises as well as our strategic partnership. We also talked about food security issues and the FARM initiative, in which India will play a key role,” he wrote.

"India and France express deep concern about the current aggravation of global food security and nutrition, already impacted by the Covid-19 pandemic, and especially in developing countries," the joint statement read.

The statement further said that the two countries are committed to addressing the risk of an aggravated food crisis, "including through initiatives such as the Food and Agriculture Resilience Mission (FARM), which aims at ensuring well-functioning markets, solidarity, and long-term resilience.”

The timing of PM Narendra Modis Paris visit, soon after President Emanuel Macron’s re-election, is seen as an ‘exceptional mark of trust and friendship’.

The message is that the two leaders have high ambitions for future of the Indo-French strategic partnership. It also signalled that India was top priority for French foreign policy, a French diplomat said.

The discussions focused on how France could continue to be India's partner of choice for attaining self-sufficiency in defence, technology, space and energy and how to accelerate joint efforts in the Indo-Pacific region while not losing focus on the challenges in the region which have not diminished, according to the people in the know.

The Russian military action in Ukraine also featured in talks. The two sides agreed on cessation of hostilities and mitigating the global economic turmoil, including food security for vulnerable countries. The two leaders discussed Afghanistan too.

This visit also holds EU significance because in the framework of the French EU Presidency (ongoing till June 30), France has spared no efforts to bring India and the Indo-Pacific even higher on the EU's agenda.

European Commission President Von Der Leyen's visit to New Delhi last week and now Modi choosing Europe for his first foreign trip of the year show that there is a strong EU-India momentum.