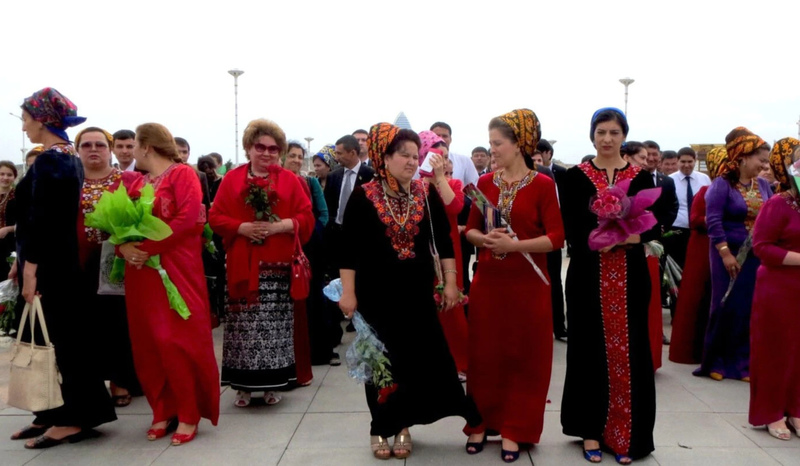 AKIPRESS.COM - In Turkmenistan, women are no longer allowed to wear "tight-fitting" clothes, dye their hair, or use beauty accessories such as false nails or eyelashes, RFE/RL reported.

In a new, Taliban-style ban, traffic police in Turkmenistan also now prohibit male drivers of private vehicles from picking up women unless they are related. Females are also banned from sitting in the front seat next to the driver.

Still further bans have been made on women having cosmetic surgery, such as breast enhancement, lip fillers, or even eyebrow microblading, which is popular with many young women in Turkmenistan.

Dozens of women have reportedly lost their jobs in recent weeks for allegedly having had breast implants or lip fillers.

The informal restrictions in the tightly controlled Central Asian country came into force this month -- shortly after new President Serdar Berdymukhammedov took office in  March 12 election in which he replaced his father.

In unprecedented raids in public places and offices, police have rounded up women wearing false eyelashes and/or nails and taken them to police stations, multiple eyewitnesses in the capital, Ashgabat, and other Turkmen cities tell RFE/RL.

In a further restriction of women's rights, the government has banned male drivers of private cars from offering a ride to a woman who is not a family member. Traffic police stop private cars carrying female passengers and demand proof that the women are related to the driver.

There was no official announcement or explanation for the latest restrictions, which are being enforced by local authorities and law-enforcement agencies across the country.

Office workers say officials and company managers have held special gatherings to discuss the new rules on women's clothes, beauty routines, and appearances, but declined to explain the reason or present a copy of the document ordering the ban.

Similar restrictions were introduced in the past, although they have never been strictly enforced.

Authorities in the country have always encouraged women to wear traditional clothes, shunning both Western-style outfits and the Islamic hijab.

A traditional outfit consists of an ankle-length, long-sleeved, embroidered dress, often made from a colorful fabric. Traditional headwear for girls is a colorful embroidered hat, while women often wear a kerchief tied behind their heads.

Traditional clothing serves as a women's uniform in the workplace, at official meetings, and at public events.