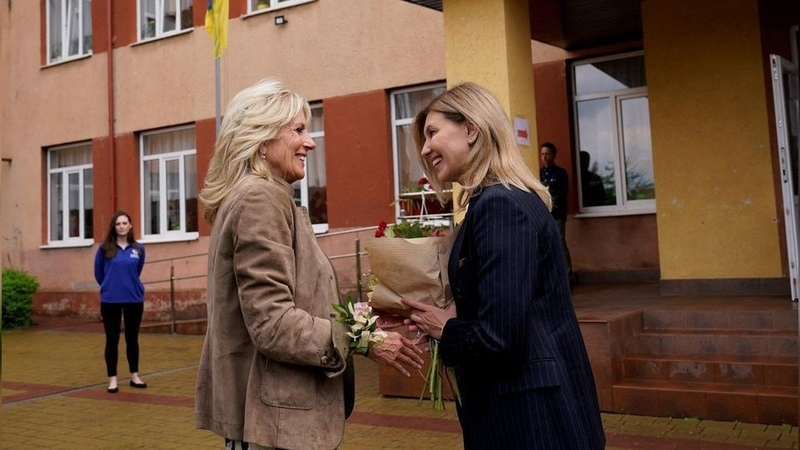 At a converted school that now serves as temporary housing for displaced citizens, Biden met with Ukrainian first lady Olena Zelenska, who has not been seen in public since the start of the war on February 24.

"I wanted to come on Mother's Day," Biden said to her Ukrainian counterpart, the two women seated at a small table in a classroom of a former school that is now a source of temporary housing for displaced Ukrainians, including 48 children. "We thought it was important to show the Ukrainian people this war has to stop. And this war has been brutal." Biden added, "The people of the United States stand with the people of Ukraine."

The meeting of the two women included a closed-door bilateral, which lasted for about one hour and took place at what was a school before the war. The building has been transformed into a refuge, a collaboration between the government of Ukraine and the International Organization for Migration, the UN migration agency. Dozens of internally displaced persons now live in the building, on a leafy property near the city center of Uzhhorod.

Biden, who is three days into a four-day visit to Europe to spend time with refugee families in Romania and Slovakia, traveled about 15 miles into western Ukraine from the Slovak border town of Vysne Nemecke to Uzhhorod.