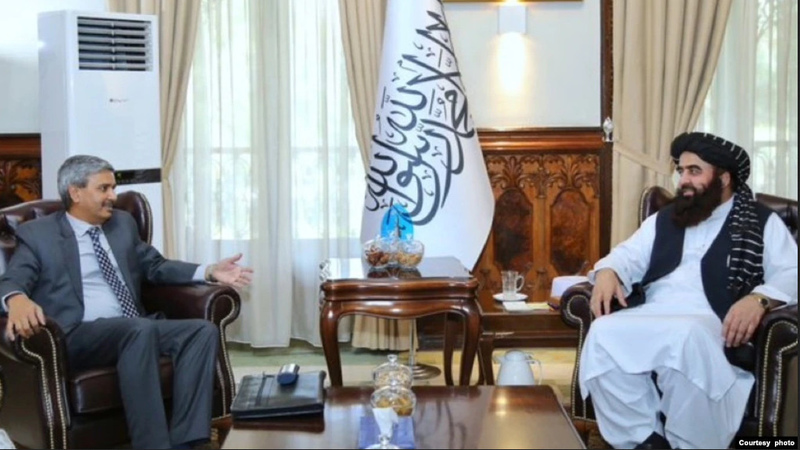 AKIPRESS.COM - India has sent a team of its foreign ministry officials to Afghanistan for the first time following the Taliban takeover of the country last August. Analysts say the visit is significant because it signals India’s decision to engage with Taliban leadership, which, like most countries, it has not recognized, Voice of America reported.

Muttaqi stressed "the resumption of projects by India, their diplomatic presence in Afghanistan and the provision of consular services to Afghans, particularly to Afghan students & patients.”

India said the officials will oversee the delivery operations of humanitarian assistance to Afghanistan and meet international organizations involved in the distribution of the aid.

In recent months, India has sent aid consignments of 20,000 tons of wheat, medicine, half-a-million doses of COVID-19 vaccine and winter clothing to Afghanistan. It has also sent vaccine to Iran to be administered to Afghan refugees. India is in the process of shipping more medical assistance and food grains to Afghanistan, according to India’s foreign ministry.

These consignments were handed over to the India Gandhi Children Hospital, Kabul and UN specialized agencies including WHO and WFP. Furthermore, India is in the process of shipping more medical assistance and foodgrains to Afghanistan

The statement said the Indian team is also “expected to visit various places where Indian programs and projects are being implemented.”

India was the region’s largest provider of development aid to Afghanistan before the Taliban takeover last August and had invested around $3 billion in projects that included schools, roads, dams and hospitals in the country since 2001 in a bid to build “soft power.” The Taliban takeover had posed a strategic setback for India and a reversal of those gains.

Now analysts say India wants to rebuild some ties with the country where its arch-enemy, Pakistan, wields considerable influence. “India is likely to pick up the threads of some of the development projects it had invested in. It would like to continue some of them,” said Manoj Joshi at the Observer Research Foundation in New Delhi. “New Delhi has decided to play on the front foot and engage the Taliban.”

India had allocated about $25 million as aid for the country in the federal budget in February. “India’s development and humanitarian assistance has received a widespread appreciation across the entire spectrum of Afghan society,” the foreign ministry said.

Analysts say that sending an official delegation to Afghanistan could be a precursor to India reopening a small mission in Kabul in coming months. India had shut down its embassy after the Taliban takeover of Afghanistan and evacuated all its diplomats and staff.

“This is a pragmatic approach by New Delhi,” according to Joshi. “If we are not there, then Pakistan will be the predominant player in the country. India has to respond to its own regional imperatives.”

Among regional countries, India alone was left without representation in Afghanistan after the Taliban takeover. China, Iran, Pakistan and Russia had not shut down their embassies in Kabul.