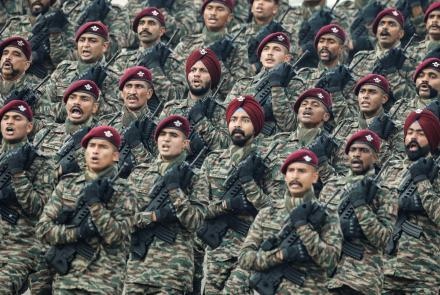 AKIPRESS.COM - India's military is overhauling its recruitment process for soldier level rank, aiming to deploy fitter, younger troops on its front lines, many of them on shorter contracts of up to four years, Indian defence officials said on Tuesday, Reuters reported.

India has one of the world's largest armed forces with some 1.38 million personnel most of them have been deployed in border regions with China and Pakistan.

The new recruitment policy called Angipath scheme, will entail induction of troops into the Army, the Air Force and the Navy for a duration of four years as entry level soldiers, airmen and sailors, respectively. Both men and women are eligible to be recruited.

In the first phase, some 46,000 youth in the age group of 17.5 years to 21 years will be recruited for a period of four years in the three services. “The Agniveers (name for those recruited under the scheme) would form a distinct rank in the Armed Forces, different from any other existing ranks,” India’s Ministry of Defence stated.

After completion of four years of services only 25 per cent of those recruited can opt for full tenure. The retaining will be done through a scientific model and centrally-maintained data and will then go on to serve with all benefits that apply to existing troops.

“Angiveers will be deployed at all places where soldiers are deployed. There will be no comprise in operational capability,” said Army Chief General Manoj Pande.

India spent $76.6 billion on its military in 2021, the highest in the world after the United States and China, according to the Stockholm International Peace Research Institute (SIPRI).

Analysts said the move by Indian Prime Minister Narendra Modi's government would bring down the armed force's pension costs, which along with salaries, form the largest chunk of the defence budget.

"In the long run, it will certainly start bringing down the revenue expenditure," said Colonel Vivek Chadha, a veteran who is now a research fellow at the Manohar Parrikar Institute for Defence Studies and Analyses in New Delhi.

"This scheme will strengthen the country's security and provide our youth an opportunity for military service," Defence Minister of India Rajnath Singh told reporters in New Delhi, where he was joined by the three service chiefs.

"A more youthful profile will help train troops more easily in newer technologies, and their health and fitness levels will be much better," Singh said.

Military officials said the new system, called Agnipath, meaning "path of fire" in Hindi, would help bring down the average age of the armed forces. In the Indian army, the largest of its three services, the average age would drop to 26 from 32, its chief, General Manoj Pande, said.

In yet another move to improve job market, Prime Minister Modi has directed government officials to recruit one million persons for vacant government posts in federal ministries and departments and the process to be completed in the next 18 months, the PM's Office said in a tweet on Tuesday.

Federal government in India has about 4 million sanctioned posts, but currently has an actual strength of about 3.2 million employees, thus having the scope for immediate recruitment of 800,000 persons. Indian Railways and Defence Department, the largest federal government employers, each having about 230,000 vacant posts.