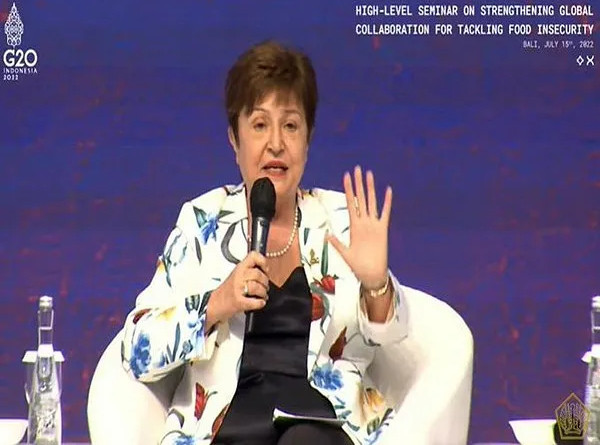 The IMF Chief made these straightforward remarks at the hybrid meeting of the G20 Finance Ministers and Central Bank Governors (FMCBG) held in Bali, Indonesia which kicked off on July 15.

“As a result, later this month we will project a further downgrade to global growth for both 2022 and 2023 in our World Economic Outlook Update. Moreover, downside risks will remain and could deepen — especially if inflation is more persistent — requiring even stronger policy interventions. Countries with high debt levels and limited policy space will face additional strains. Look no further than Sri Lanka as a warning sign,” she said.

Due to the ongoing Russia - Ukraine conflict, emerging and developing countries have also been experiencing sustained capital outflows for four months in a row as they now suffer the risk of reversing three decades of catching up with advanced economies.

Sri Lanka has been facing the worst economic crisis since independence in 1948, leading to an acute shortage of essential items like food, medicine, cooking gas, and fuel across the island nation.

The nearly-bankrupt country, with an acute foreign currency crisis that resulted in foreign debt default, had announced in April that it is suspending nearly $ 7 billion foreign debt repayment due for this year out of about $ 25 billion due through 2026, Sri Lanka’s total foreign debt.

The economic crisis has particularly impacted food security, agriculture, livelihoods and access to health services. Food production in the last harvest season was 40 – 50 per cent lower than last year, and the current agricultural season is at risk, with seeds, fertilisers, fuel, and credit shortages.

Sri Lanka is one of the few nations named by the Food and Agriculture Organization (FAO) which is expected to go without food due to the global food shortage expected this year.

The 3rd FMCBG meeting was attended by the largest number of delegations of Indonesia’s G20 Presidency, with 407 foreign delegations attending in person and another 120 virtually. In addition, 19 Finance Ministers and 11 Central Bank Governors attended the meeting in person.

Indonesia, as G20 President, also invited the Finance Minister of Ukraine to attend the event virtually. The physical presence of most G20 delegations, invitees and international organisations in Bali demonstrated the global commitment to support Indonesia’s G20 Presidency and revive economic sustainability, particularly amid the emerging global challenges.

The Minister of Finance and Governor of Bank of Indonesia, Sri Mulyani Indrawati hosted the meeting.