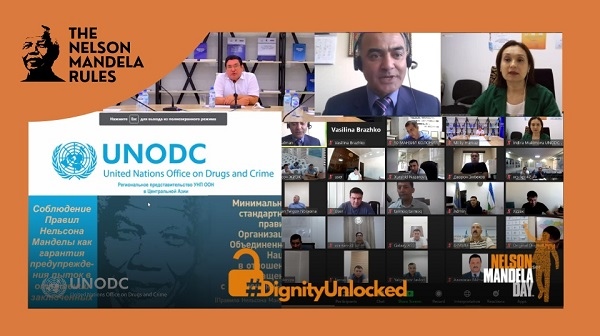 AKIPRESS.COM - Over 50 participants took part in the discussion of the United Nations Standard Minimum Rules for the Treatment of Prisoners known as the Nelson Mandela Rules, UNODC  press service reported.

They emphasized the importance of prison services management, which is one of the fundamental directions in the protection of human rights and freedoms.

Tillabaev noted that constitutional commission of Uzbekistan proposed to include humane treatment of prisoners and convicts in the Constitution as a part of undergoing reforms.

He added that the criminal law policy is being improved in the country, a draft penal code has been developed with the Ministry of Internal Affairs and other interested parties, and that it is under discussion. The new documents reflect the Nelson Mandela Rules.

UNODC Regional expert on penitentiary issues for Central Asian countries Batyr Saparbaev emphasized that the number of imprisoned in Central Asia is 102,213. To reduce this number, there is a strong need to introduce rehabilitation and reintegration programmes.

Saparbaev informed that UNODC launched the toolkit on the Mandela Rules for the prisoners treatment which is aimed at improving prison staff training, prison inspections and sound prison legislation.

"Prisons are not to punish, rather their primary function is reformation, rehabilitation, and reintegration of offenders back in the society. This can only be achieved by respecting the inherent dignity of prisoners as human beings and respecting their rights," UNODC Drug Control Crime Prevention Officer Shah Salman Khan said.

Nelson Mandela Rules, which emphasize the provision of health care services to prisoners, is considered as the State’s responsibility, and the attitude of health-care professionals towards prisoners is governed by the same ethical and professional standards as those applicable to patients in the local community.

In 2021, UNODC together with National Human Rights Centre, the Academy of the General Prosecutor’s Office and Ministry of Internal Affairs of the Republic of Uzbekistan conducted trainings among cadets and law enforcement bodies across the country to introduce and apply the Nelson Mandela Rules into practice and educated over 1,200 prison service officers in the past six months.