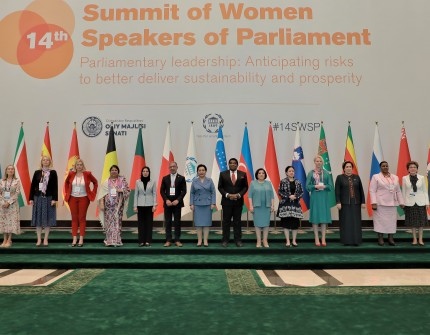 AKIPRESS.COM - On September 8-9, 2022, The delegation of Turkmenistan headed by Chairman of the Assembly of the Parliament Gulshat Mammedova participated in the 14th Summit of Women Speakers of Parliament of the member states of the Inter-Parliamentary Union held in Tashkent, Foreign Ministry of Turkmenistan reported.

The summit discussed the priority tasks facing parliaments, as well as guaranteeing gender equality in the crisis caused by the pandemic, ensuring sustainable development and prosperity, and empowering women in economic recovery.

Speaker of the Assembly of the Parliament Gulshat Mammedova noted that Turkmenistan attaches great importance to the tools of parliamentary diplomacy in strengthening peace and security, including enhancing the role of women parliamentarians.

The readiness of the Parliament of Turkmenistan for bilateral and multilateral cooperation in the field of ensuring peace and security, achieving sustainable development goals was expressed.

As part of the visit program, President of Uzbekistan Shavkat Mirziyoyev received Speaker of the Assembly of the Parliament of Turkmenistan Gulshat Mammedova.

The President of Uzbekistan noted the current high level of Turkmen-Uzbek relations based on strong ties of friendship and good neighborliness, trust and strategic partnership.

During the visit, the Turkmen delegation also met with Chairman of the Senate of the Parliament of Uzbekistan Tanzila Narbayeva.