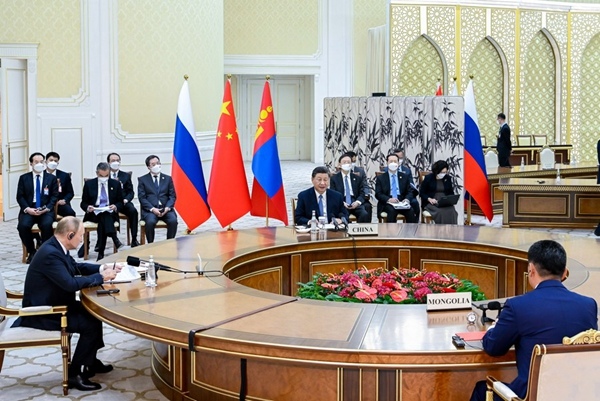 AKIPRESS.COM - The sixth meeting of heads of state of China, Russia and Mongolia was held on September 15 in Samarkand.

Xi underscored the strong impetus and resilience of the cooperation among China, Russia and Mongolia, China.org.cn reported.

Xi put forth a four-point proposal on furthering China-Russia-Mongolia cooperation: First, keep the trilateral cooperation in the right direction. It is important to deepen political mutual trust, increase mutual support, respect and accommodate each other's core interests and major concerns, and strengthen coordination and collaboration in international and regional affairs.

Third, follow through on the common understanding reached on the building of the China-Mongolia-Russia Economic Corridor, support the neighboring regions in deepening cooperation in economy and trade, people-to-people exchanges, tourism and other fields, and continue to build high-quality platforms for the exchanges of business communities of the three countries.

Fourth, work for more outcomes in trilateral cooperation and support the expansion of settlement in local currencies in mutual trade. Russian and Mongolian financial institutions are welcome to join the RMB Cross-border Interbank Payment System to build a strong bulwark of financial security in the region.

Putin said that Russia-China-Mongolia trilateral cooperation has made significant progress, and, with its mutually beneficial nature, adds value to the development of their mutual relations.

As close neighbors, he said, the three countries should give each other understanding and support, and consolidate and promote trilateral cooperation across the board.

The three countries should encourage and support their entrepreneurs to strengthen exchanges and cooperation, and push for more substantial progress in cooperation in areas such as transport, logistics, cross-border transportation, energy, high and new technology, tourism and people-to-people exchanges, he said.

Khurelsukh said that the development of good-neighborly and friendly cooperation with China and Russia is a diplomatic priority for Mongolia.

Given the complex international situation, it is all the more important to strengthen trilateral cooperation among Mongolia, China and Russia, he said.

The Mongolian side, he said, is ready to strengthen communication with China and Russia and jointly work for progress in both bilateral and trilateral cooperation in trade, investment, environment, energy, railway, tourism and other areas.

The three countries confirmed the extension of the Outline of the Development Plan on Establishing the China-Mongolia-Russia Economic Corridor by five years, officially launched the feasibility study on the upgrading and development of the central-route railway of the China-Mongolia-Russia Economic Corridor, and agreed to actively move forward the project on the Mongolian section of the China-Russia natural gas pipeline.