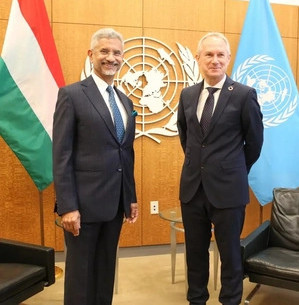 Rafale fighter jets are the common element in trilateral strategic partnership. India and UAE have both purchased Rafale fighters from France. The three countries are keen to form a trilateral Rafale forum and India will play a key role in the forum.

"A productive first trilateral ministerial meeting of France-India-UAE. Active exchange of ideas between strategic partners and UNSC members. Thank @ABZayed for hosting @MinColonna and me," India’s foreign minister S Jaishankar tweeted following the meeting in New York on the sidelines of the UNGA.

The France-India-UAE trilateral is a new and more contemporary way of doing diplomacy with a focus on "active exchange" of ideas between strategic partners and UNSC members. The three countries, while different, are strategic partners to one another and discussions focused on areas of commonalities and on working out how to specify and concretise commonalities going forward, according to people familiar with the partnership. The three countries are very comfortable with each other and there are many areas where potentially they could be working in a more coordinated way.