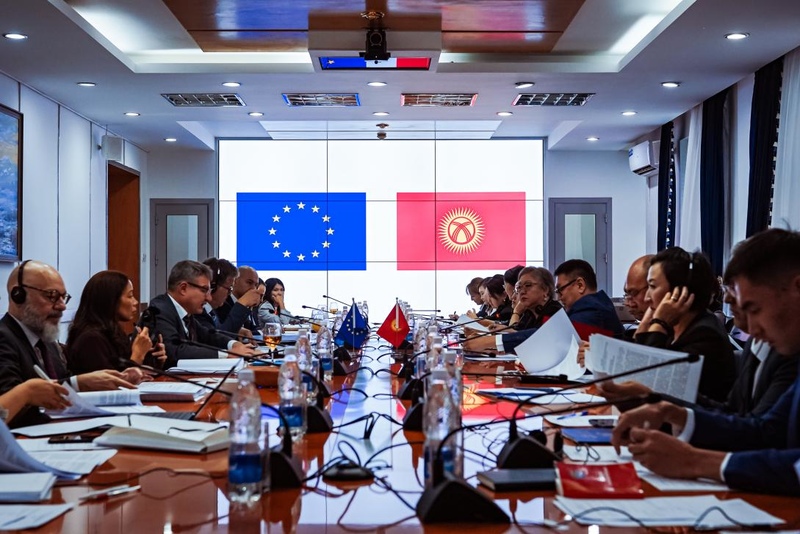 AKIPRESS.COM - A team of European Union officials conducted a monitoring visit in the Kyrgyz Republic from 12 to 17 September to review the country’s progress in implementing the 27 international conventions applicable under the EU Generalised Scheme of Preferences’ Special Incentive Arrangement for Sustainable Development (GSP+). As a beneficiary of GSP+ since 2016, Kyrgyzstan benefits from trade preferences and the complete removal of tariffs on 66% of all products exported to the EU and commits to effectively implement the 27 conventions.

The monitoring mission was held back-to-back with the Annual EU – Kyrgyz Republic Human Rights Dialogue which took place on 15 September 2022.

The visit covered a wide range of issues, including the respect of fundamental human rights and freedoms, labour rights, the protection of the environment and climate, and good governance.

During the week, the mission met with various government entities, including the Ministries of Foreign Affairs, Economy and Commerce, Labour, and Environmental Protection. The mission also had exchanges with the Ombudsperson as well as with trade unions, employers organisations, businesses, civil society organizations working on human rights and the environment, UN agencies and other international partners.

The monitoring visit noted that although effective utilisation of GSP+ is limited for the time being, the scheme is well-known and valued by government, civil society, and business.

The EU recognised positive efforts in the drug control regime, where the government maintained a humanised and harm-reduction based approach and commended Kyrgyzstan’s ambitious commitment in the revised Nationally Determined Contributions (NDCs) under the Paris Agreement.

The monitoring mission further highlighted the active tripartite social dialogue with the Federation of Trade Unions (FTU) and employers organisation participating in the work on the national inventory of legislation related to labour rights. However, they observed that issues relating to the Trade Union Law had not been resolved, with discussions ongoing.

Overall, EU officials highlighted several implementation challenges in five key areas: increased pressure on civil society and freedom of the media, rights of women, anti-discrimination, anti-corruption, torture and conditions in the penitentiary system. The ongoing national inventory of legislation is a window of opportunity for laws to be revised in full compliance with the conventions and subject to consultation with the public.

The monitoring and engagement with the government of Kyrgyzstan, and any progress made will be reflected in the upcoming GSP report that is to be submitted to the European Parliament and the Council of the European Union at the end of this year.

This last report will be an important point of reference in the context of the ongoing revision of the GSP+ legal framework and the reapplication of the Kyrgyz Republic. The current GSP regulation will expire on 31 December 2023. In order to allow economic operators and third country beneficiaries to adapt, a new regulation will be agreed well before 2024.

The EU’s GSP+ scheme is a unilateral trade tool that removes import duties from products coming into the EU from lower middle-income countries, supporting sustainable development.