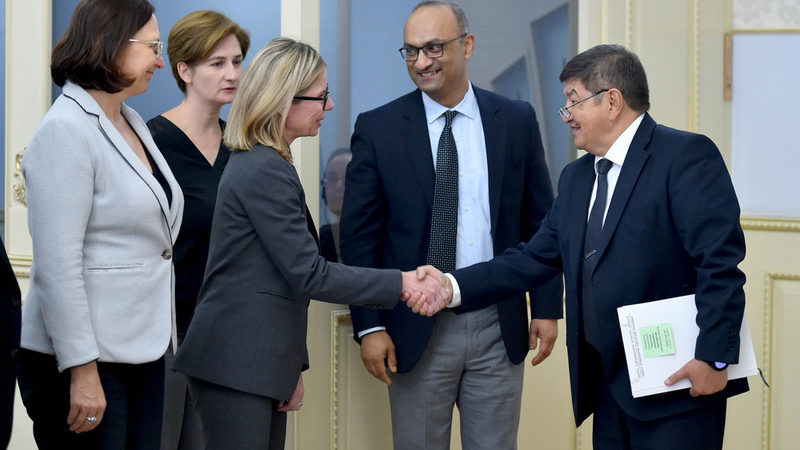 Ms. Bjerde met with President Shavkat Mirziyoyev, as well as senior government officials, and beneficiaries of a World Bank-funded project that is helping improve rural infrastructure in Uzbekistan.

During her meeting with President Mirziyoyev, Ms. Bjerde discussed the results of 30 years of partnership between Uzbekistan and the World Bank, an anniversary which was celebrated in September this year. President Mirziyoyev and Ms. Bjerde noted in particular the achievements of the stepped-up World Bank financial and advisory support to help Uzbekistan implement transformative economic and social reforms since 2017, and they agreed to expand strategic bilateral cooperation across several economic and social spheres.

In her meetings with counterparts, Ms. Bjerde discussed the implementation of the recently launched Country Partnership Framework (CPF) for Uzbekistan for the next five years. The CPF supports the authorities in developing the private sector to create new jobs and reduce poverty, improving human capital, building a green and sustainable economy, closing gender gaps, and creating conditions for wider citizen engagement. The CPF is aligned with the Development Strategy of the New Uzbekistan for 2022-26 and will help the authorities achieve the country's ambitious development goals.

Ms. Bjerde and counterparts also discussed the progress of the Government’s reforms and World Bank support to reforming and privatizing state-owned enterprises and banks, modernizing agriculture, energy, financial and other strategic sectors, improving education, healthcare, and social protection services, developing transport connectivity, improving rural and urban infrastructure, empowering women, and improving the business and investment climate. Discussions were also held around the upcoming Country Climate and Development Report that the World Bank is preparing for Uzbekistan.

“We welcome that, despite the ongoing global shocks and crises, Uzbekistan’s path for reforms and development impact for its citizens through an inclusive and sustainable market economy transition remains the top priority for the Government,” said Anna Bjerde. “As we celebrate the 30th anniversary of the partnership with Uzbekistan, the World Bank looks forward to supporting the authorities reach their ambitious development goals through implementing the Country Partnership Framework which outlines our financial and advisory support for the reform agenda and priority development projects in the years to come.”

During her stay in Uzbekistan, Ms.Bjerde also visited Saroy village, located in the Jizzakh Region, and met with local residents, students, parents, and teachers. Saroy is one of 306 remote villages in five regions of the country(Andijan, Namangan, Ferghana, Sirdarya and Jizzakh regions) benefiting from a rural infrastructure development project,which is being implemented by the Government with financial support from the World Bank and the Asian Infrastructure Investment Bank.

The project directly involves local communities through a participatory process to identify their infrastructure needs. In over 175 villages, residents have already produced community development plans, which will receive funding to implement sub-projects, such as the upgrading or construction of drinking water, gas, and electricity supply systems, roads, schools, and other basic infrastructure and services.

The residents of Saroy village voted for the rehabilitation of the local school that had been built decades ago and did not meet public building codes and standards.  During their meeting with Ms. Bjerde, they presented the community’s experience in developing and supervising the implementation of a sub-project that completely rebuilt and expanded the school’s facilities. The school is now able to accommodate more students from Saroy and neighboring villages and is better equipped to ensure student learning.

The World Bank’s country program in Uzbekistan is among the top three largest in the Europe and Central Asia region. As of October 1, 2022, it consisted of 27 projects, with net commitments totaling around $4.76 billion.

These projects provide support in critical areas, such as macroeconomic reforms and the modernization of agriculture, water resource management, water supply and sanitation, energy, transport, health, education, social protection, urban and rural infrastructure, national innovation, tax administration, statistical and financial systems, etc. They also help in the mitigation of the health, social, and economic implications of the COVID-19 pandemic, as well as build resilience from the impacts of climate change.