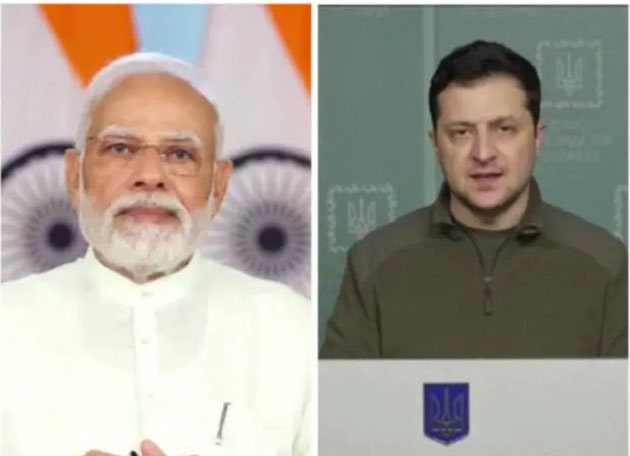 AKIPRESS.COM - Indian Prime Minister Narendra Modi spoke with Ukrainian President Volodymyr Zelensky on Tuesday and asserted that there can be no military solution to the Ukraine conflict, while also underlining that endangerment of nuclear facilities could have catastrophic consequences, Business Standard reported.

During their telephonic conversation, Modi and Zelensky discussed the ongoing conflict in Ukraine and the prime minister reiterated his call for an early cessation of hostilities and the need to pursue the path of dialogue and diplomacy, according to a statement issued by Modi’s Office.

Modi expressed his firm conviction that there can be no military solution to the conflict and conveyed India's readiness to contribute to any peace efforts, the statement said. He also reiterated the importance of respecting the UN Charter, International Law, and the sovereignty and territorial integrity of all states.

During his conversation with the Ukrainian president, Modi emphasised the importance India attaches to the safety and security of nuclear installations, including in Ukraine. The prime minister underlined that endangerment of nuclear facilities could have far-reaching and catastrophic consequences for public health and the environment, the statement said.

The two leaders also touched upon important areas of bilateral cooperation, following up on their last meeting in Glasgow in November 2021, it said.

Ukraine and Russia have blamed each other for the attacks on the Zaporizhzhia plant, Europe's largest atomic power complex.

Also, Russian President Vladimir Putin on Friday signed treaties to absorb the Luhansk, Donetsk, Kherson and Zaporizhzhia regions of Ukraine, including the area around the nuclear plant.

The International Atomic Energy Agency had said Saturday that Russia told it that the "director-general of the Zaporizhzhia nuclear power plant was temporarily detained to answer questions”.

The Vienna-based IAEA has said, "in line with its nuclear safety mandate", it "has been actively seeking clarifications and hopes for a prompt and satisfactory resolution of this matter”.

The conversation between Modi and Zalenskyy comes a couple of weeks after Modi had pressed Putin to end the conflict in Ukraine soon, saying "today's era is not of war". Modi had also called for finding ways to address the global food and energy security crisis.

In a bilateral meeting with Putin on the sidelines of the annual summit of the Shanghai Cooperation Organisation (SCO) in Samakand last month, Modi had underlined the importance of "democracy, dialogue and diplomacy" while calling for an early cessation of hostilities in Ukraine.

"Today the biggest worry before the world, especially developing countries, is food security, fuel security, fertilisers. We must find ways on these problems and you will also have to consider it. We will get an opportunity to talk about these issues," Modi had said during his meeting with Putin.

It was the first in-person meeting between the two leaders after the Ukraine conflict began in February.

"I know today's era is not of war. We discussed this issue with you on phone several times, that democracy, diplomacy and dialogue touch the entire world. We will have the opportunity to talk today about how we can move forward on the road of peace in the coming days," Modi had said.