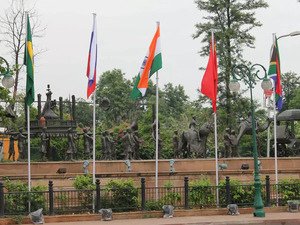 AKIPRESS.COM - The BRICS (Brazil, Russia, India, China and South Africa) countries are exploring establishing a new reserve currency to better serve their economic interests, according to senior Russian diplomat and BRICS points person Pavel Knyazev. It will be based on a basket of the currencies of the five-nation bloc, The Economic Times reported.

"The possibility and prospects of setting up a common single currency based on a basket of currencies of the BRICS countries is being discussed," Knyazev, Russian Sous Sherpa on BRICS said during a discussion at Valdai Club in Moscow last week. Valdai is closely associated with President Vladimir Putin.

During the 14th BRICS Summit in June, Russian President Vladimir Putin announced that Brazil, Russia, India, China, and South Africa plan to issue a "new global reserve currency." "We are ready to openly work with all fair partners," he had then stated.

According to analysts, the BRICS reserve currency is meant to rival the US dollar and the IMF's Special Drawing Rights (SDRs) currency.

According to Knyazev, member states are "actively studying mechanisms" to exchange financial information to develop a reliable alternative for international payments.

BRICS plans to build a joint financial infrastructure that will enable a reserve currency to be created to reduce reliance on the dollar and euro, according to persons familiar with the development. BRICS has been boosting intra BRICS economic ties, with trade turnover steadily growing despite restrictions brought on by the pandemic and the conflict in Ukraine.