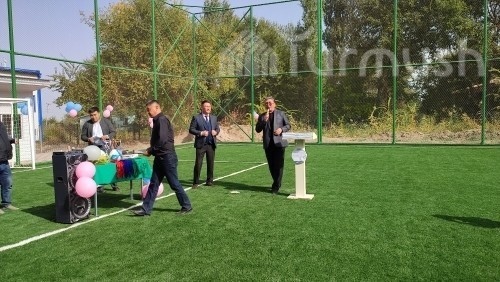 AKIPRESS.COM - A new mini-football field was opened in Ak-Bashat village of Jayil district in Chui region.

The residents of remote villages Aral, Aydarbek and Ak-Bashat will use the field. About 5.5 million soms were spent on the construction.

"There are only 4 villages in our area, of which three are remote. They are located 10-15 kilometers from the center. The youth went to training in Novo-Nikolaevka every day," head of rural municipality Ak-Bashat Ulan Karymbaev said.

A football field, showers and locker rooms were built in 1.5 months.

A sports complex and a mini-football field are being built in Novo-Nikolaevka village.

A modern playground is also being built in Aral for 600,000 soms, Karymbaev noted.

1.3 kilometers of roads were paved as well in Aydarbek.

The administration intends to replace the asphalt on the sidewalks of rural roads at 10-15 kilometers soon, head of Ak-Bashat rural municipality added.