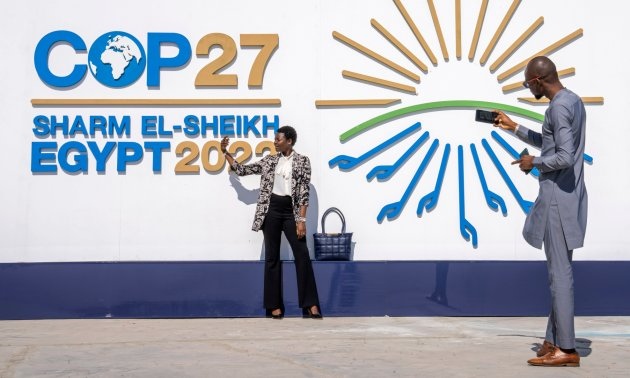 AKIPRESS.COM - UN Secretary General Antonio Guterres on Monday launched the Executive Action Plan at COP27 Summit in Sham-El-Sheikh, Egypt for the Early Warnings for All initiative, a $3.1 billion plan to install early warning systems globally between 2023 and 2027. The plan covers disaster risk knowledge, observations and forecasting, preparedness and response and the communication of early warnings, Sputnik reported.

The UN Chief said that almost half of the world's countries lack an early warning system to predict extreme weather events.

He said that that events related to human-induced climate change and more extreme weather have increased by a factor of five, with people living in Least Developed Countries (LDCs) and Small Island Developing States (SIDS) being on the “frontlines of climate change.”

The UN Secretary General stated that ever-rising greenhouse gas emissions are supercharging extreme weather events across the planet, adding "These increasing calamities cost lives and hundreds of billions of dollars in loss and damage. Three times more people are displaced by climate disasters than war. Half of humanity is already in the danger zone.”

He further noted that a sum of $3.1 billion to cover the entire globe with early warning systems was just a fraction of $50 billion that has been requested for climate adaptation financing.

During the COP27 conference, it was said that the plan to achieve universal coverage of the advance warning systems was drawn up by the World Meteorological Organization (WMO) and signed by 50 countries.

India’s Environment Minister Bhupender Yadav, who is leading the Indian delegation, has lauded a UN-backed initiative to fund the installation of early warning system across the world to anticipate extreme weather events, saying that the move would help in saving lives in the developing countries that are most vulnerable to climate change.

While delivering his remarks at the UN Secretary General High Level Round Table to launch the "Early Warnings for All Executive Action Plan" at the Conference of the Parties of the United Nations Framework Convention on Climate Change (UNFCCC), or COP27 Summit in Egypt, Yadav underlined that early warning systems would prove to be especially beneficial for countries lying between the Tropics of Cancer and Capricorn.

He said with climate finance still scarce, climate adaptation in the form of early warning dissemination is key to securing lives and livelihoods. Speaking about India’s efforts in this direction to have a robust early warning system, Yadav said the country has been working on strengthening end-to-end early warning systems for all hydro-meteorological hazards.

"Early warnings for all play a part in not just containing the immediate physical impacts, but also mitigating the far-reaching long-term socio-economics implications that follow,” stated Yadav. India dully supports the Secretary General’s agenda to achieve early warnings for all, he stressed.

Yadav also noted that India had been able to reduce deaths in extreme weather events by around 90 percent after achieving 100 percent early warning system coverage on both the eastern and western coastlines.

He said that the Cyclone Warning Division at the Delhi-based India Meteorological Department (IMD) have been issuing warnings for weather events not only in India, but also in 13 other countries.

Yadav informed the gathering that India has spearheaded the Coalition for Disaster Resilient Infrastructure (CDRI) which is working towards developing applications of climate forecast and early warning for reducing infrastructure losses and disruption in basic services.