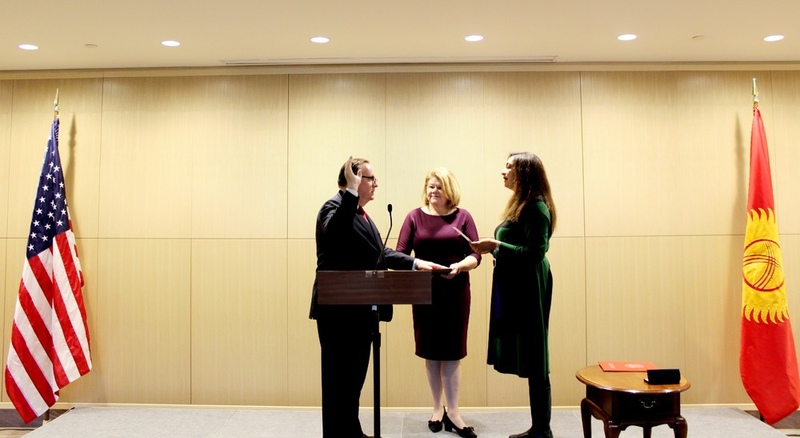 AKIPRESS.COM - Lesslie Viguerie has been sworn in as U.S. Ambassador to the Kyrgyz Republic at the U.S. Department of State, U.S. Embassy in Bishkek said.

Lesslie Viguerie, a career member of the Senior Foreign Service with the rank of Minister-Counselor, currently serves as the State Department’s Deputy Assistant Secretary for Central Asia and Pakistan Affairs in the Bureau of South and Central Asian Affairs. Previously, he was Deputy Chief of Mission at U.S. Embassy Tashkent, Uzbekistan, and Minister-Counselor for Political Affairs at U.S. Embassy New Delhi, India. In Washington, he was Director for Europe and Asia in the Bureau of International Narcotics and Law Enforcement Affairs and Director for Central Asia in the Bureau of South and Central Asia Affairs. Other overseas assignments include Deputy Political Counselor in U.S. Embassy New Delhi, Senior Director of the Interagency Rule of Law Section in U.S. Embassy Kabul, and External Political Relations Chief in U.S. Embassy Moscow. Viguerie has devoted much of his nearly 30-year Foreign Service career to South and Central Asia. This extensive and substantive regional experience, coupled with his management experience and demonstrated ability to lead large interagency teams as well as policy-oriented offices, makes him a well-qualified candidate to be the U.S. Ambassador to Kyrgyzstan.

A native of Virginia, Viguerie is the recipient of numerous State Department performance awards, including a Senior Foreign Service Performance award. Viguerie is a graduate of The George Washington University (B.A.) and Catholic University of America (J.D.) and is a member of the District of Columbia Bar Association. He speaks Russian, Hindi, and Portuguese.