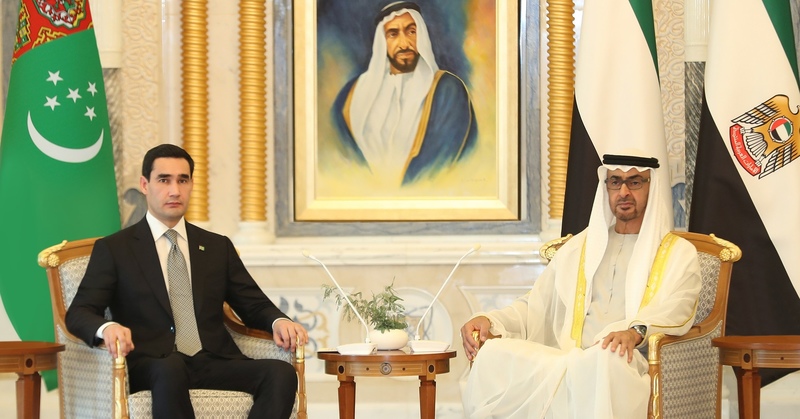 AKIPRESS.COM - President of Turkmenistan Serdar Berdimuhamedov left for an official visit to the United Arab Emirates on November 21, the Foreign Ministry reported.

The presidential airliner landed at the International Airport of Abu Dhabi, where President Serdar Berdimuhamedov was met by Minister of Energy and Infrastructure of the UAE Suheil Al Mazrui and other officials.

President of the UAE Sheikh Mohammed bin Zayed Al Nahyan met with Serdar Berdimuhamedov at the Palace of the President.

Berdimuhamedov and Sheikh Mohammed bin Zayed Al Nahyan held bilateral talks in an expanded format, with the participation of delegations from both countries.

The President of the UAE noted that great importance is attached to the visit of the President of Turkmenistan and the current negotiations in further strengthening and development of interstate relations.

The talks were followed by a one-to-one high-level meeting. The sides discussed the implementation of the bilateral agreements, aimed at the realization of the potential of the Turkmen-Emirati cooperation.

The UAE has participated in the implementation of projects carried out in Turkmenistan over the past years. Turkmenistan established contacts with investment and financial institutions of the United Arab Emirates, in particular, with the Abu Dhabi Development Fund.

The parties also exchanged views on a number of topical aspects of the regional and global agenda of mutual interest, which primarily concerns ensuring global peace, security and sustainable development.

The official visit of the President of Turkmenistan to the United Arab Emirates continues.