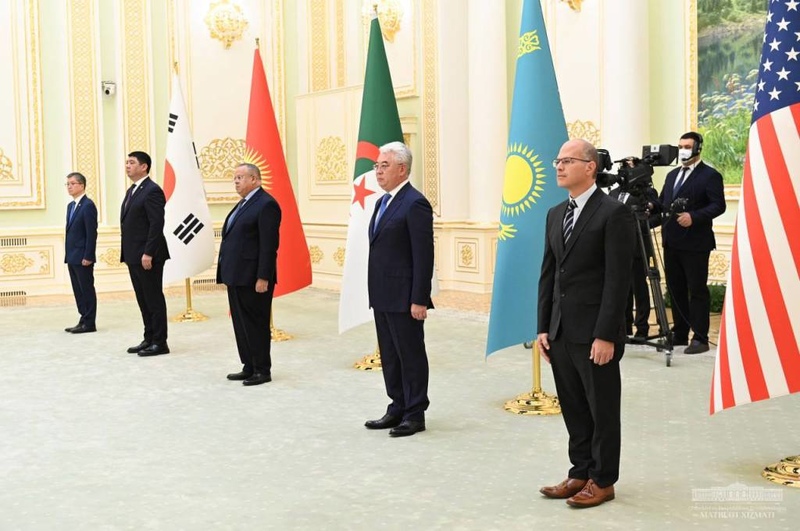 The Presient sincerely welcomed the newly appointed ambassadors and congratulated them on the beginning of the diplomatic mission in Uzbekistan.

Addressing the Ambassador of Kyrgyzstan, President Mirziyoyev emphasized that people of Uzbekistan and Kyrgyzstan are close neighbors who share a common history, culture and traditions. A constructive dialogue based on trust and mutual respect has been established between the two countries. The state visit of the President of the Kyrgyz Republic Sadyr Japarov to Uzbekistan on March 11-12 last year opened a new page in the history of relations.

Today, all current issues are being resolved promptly, taking into account the interests of both sides for the benefit of the fraternal people of the two countries. Thus, as a result of the reached agreements, the issue of borders, which became an unprecedented success for the two countries, was resolved, he said.

Cooperation is intensifying in the economy, agriculture, energy, transport, education and cultural-humanitarian spheres. Since the beginning of the year, the trade turnover between the two countries has increased by 30 percent and reached $1 billion.

The launch of regional infrastructure projects, including the construction of the Kambar-Ata hydropower plant, China-Kyrgyzstan-Uzbekistan, serves the common interests of two countries.

The confidence was expressed that the upcoming visit of the President of Uzbekistan to Kyrgyzstan will further strengthen bilateral relations.