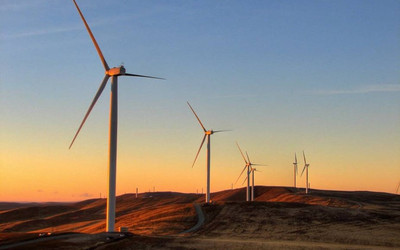 AKIPRESS.COM - The European Bank for Reconstruction and Development (EBRD) has arranged two syndicated loans worth US$ 520 million to help construct and put into operation two wind power plants with a total installed capacity of 1GW in the Bukhara region. The financing is the EBRD’s largest renewable energy project to date across its regions.

The Bank’s loan of US$ 277 million to Bash Wind Power Plant (WPP) will consist of an A loan of US$ 150 million on the EBRD’s own account and a B loan of US$ 127 million, which will be syndicated to commercial lenders. The new wind power plant will generate more than 1,650 GWh of electricity annually and help reduce annual CO2 emissions by 930,000 tonnes.

The EBRD’s US$ 243 million loan to Dzhankeldy WPP will consist of an A loan of US$ 150 million on the Bank’s account, while the remaining US$ 93 million will be syndicated to commercial banks. This power plant will generate more than 1,550 GWh of electricity annually and help cut annual CO2 emissions by 890,000 tonnes.

Both Bash Wind and Dzhankeldy Wind are special project companies owned by ACWA Power - an international developer, investor, co-owner and operator of a portfolio of power generation and desalinated water production plants.

In line with best international practice, the power plants will use Identiflight technology, an aerial artificial intelligence (AI)-based high-resolution stereo camera (HRSC) system for monitoring and detecting species at risk of collision with wind turbines. The system triggers an automatic shutdown of selected turbines if a collision is likely.

Uzbekistan’s renewables deployment plan targets the development of 12 GW of solar and wind capacity by 2030. These projects are a significant addition to the EBRD’s renewable energy portfolio in the country and will help Central Asia’s largest economy achieve its ambitious objective.

The projects contribute to implementation of a long-term decarbonisation strategy that the EBRD and the government of Uzbekistan have jointly worked on, which will support the plan to achieve a carbon neutral power sector by 2050.

To date, the EBRD has invested almost €3.71 billion in 121 projects across Uzbekistan. Historically the Bank’s financing has helped create 1.85 GW of new renewable capacity in Central Asia.