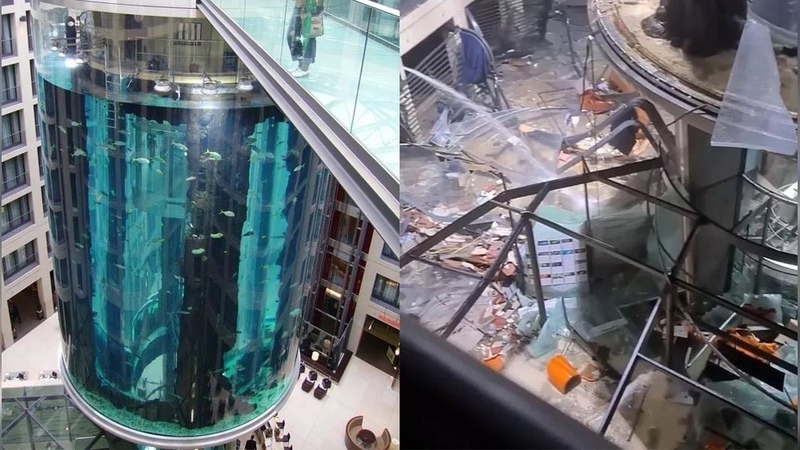 AKIPRESS.COM - An aquarium in Berlin that was home to around 1,500 exotic fish burst early on Friday, spilling 1 million litres of water and debris onto a major road in the busy Mitte district, emergency services said.

Around 100 emergency responders rushed to the site, a leisure complex that also houses a Radisson hotel and a museum as well as the aquarium, the Globe and the Mail reported.

Sea Life Berlin offered glass elevator rides through the AquaDom aquarium, which it says was the world’s largest freestanding cylindrical aquarium at 14 metres (46 feet) in height.

Two people were injured by splinters of glass, and police evacuated the hotel in the complex on concern that there could be structural damage.

Search and rescue dogs scoured the ground floor of the building, which was too littered with debris for responders to access, but found no casualties, the Berlin fire brigade said on Twitter.

A spokesperson for the fire brigade told Reuters it was still unclear what had caused the AquaDom aquarium to burst.

Sea Life said on its website it would remain closed on Friday due to the incident. The company did not immediately respond to requests for comment by Reuters.

Neither the fire brigade nor the police commented on the fate of the fish, though police said on Twitter there had been "unbelievable maritime damage".

Around 350 people who had been staying at the hotel in the complex were asked to pack their belongings and leave the building, the fire brigade spokesperson said.

Buses were sent to provide shelter for people leaving the hotel as outside temperatures in Berlin hovered around -7 degrees Celsius, police said.

Emergency services shut a major road next to the complex that leads from Alexanderplatz toward the Brandenburg Gate due to the large volume of water that had flooded out of the building.

The aquarium was last refurbished in 2020, according to the website of the DomAquaree complex. During the upgrading work, all the water was drained from the tank and the fish were moved to aquariums in the basement of the building, where there is a breeding care facility for the fish, it said.