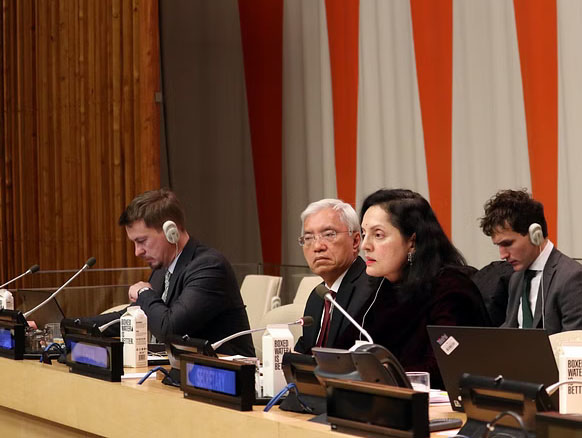 AKIPRESS.COM - India’s Permanent Representative to the United Nations, Ruchira Kamboj, on December 20, chaired an open briefing of the UN Security Council Counter-Terrorism Committee on Central Asia. In her opening remarks, Kamboj underscored that the counter-terrorism committee has established a “long-standing and constructive dialogue” with Central Asia which she called a “key partner” in the international counter-terrorism efforts, The Print reported.

In a tweet, the Indian Diplomat said, “Today, I chaired an open briefing of the Security Council #CounterTerrorism Committee on Central Asia. It has been my honour to chair the Committee on behalf of India these past 5 months. As the #terrorism threat evolves, so must the common resolve of Member States to address it.”

Sharing details on the UNSC briefing, the United Nations Counter-Terrorism Committee Executive Directorate on its official Twitter handle said, “The Counter-Terrorism Committee has established a long-standing and constructive dialogue with the States of Central Asia, which remain key partners in the international counter-terrorism efforts, H.E. Ms. @ruchirakamboj reiterated in her #CTC #CentralAsia open briefing remarks.”

“Given the importance of Central Asia to the international fight against terrorism, some States of the region have been visited more than once. Earlier this month, the Committee concluded the physical component of the second follow-up assessment visit to Uzbekistan,” India’s Permanent Representative said.

“With this event, we are continuing the established practice of thematic and regional open briefings by the Counter-Terrorism Committee for all United Nations Member States, Observers and relevant international and regional organizations,” she added.

In Counter-Terrorism Committee on Central Asia briefing, the Analytical Support and Sanctions Monitoring Team shared an overview of the terrorist threat to the region, both from listed and non-listed groups and individuals associated with ISIL/Daesh-AQ terrorists with roots in Central Asia.

In the briefing, Turkmenistan announced that the country is implementing its strategy on the prevention of violent extremism and countering terrorism as well as the plan given by the relevant United Nations Security Council resolutions on eradicating the “dangers of terrorism, illicit drug trafficking, extremism and the propaganda of terrorism.”

Jonibek Hikmatov, Tajikistan’s Ambassador to United Nations in the Counter-Terrorism Committee on Central Asia briefing said, “We believe there is an increasing need to develop new innovative approaches to the joint fight against #terrorism and the spread of extremist ideology, including using modern technologies.”