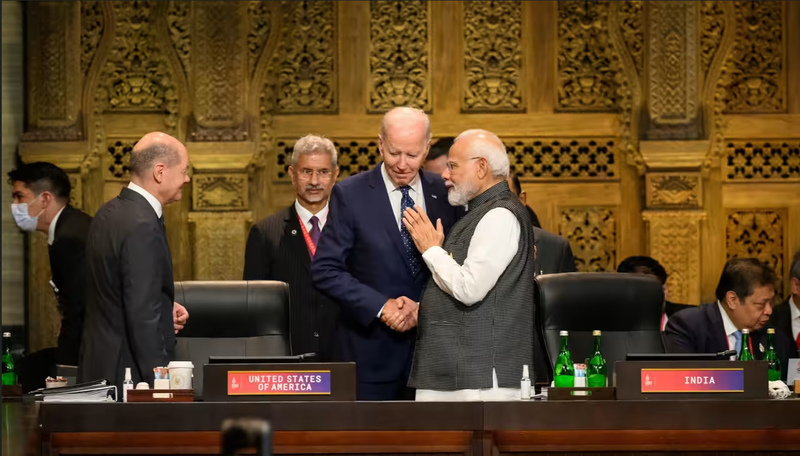 U.S. President Joe Biden and Indian Prime Minister Narendra Modi chat ahead of a working session during the G-20 Summit in Bali, Indonesia, on Nov. 15, 2022.

AKIPRESS.COM - White House coordinator for Indo-Pacific affairs, Kurt Campbell highlighted the growing stature of India in the world and said that the US remains "bullish" on India, adding, "Our interests are to see India playing an ever larger, responsible role in almost everything that we're doing," Nikkei Asia reported.

At Indo-Pacific Forecast 2023, an annual preview of political, security, and economic developments held by the Washington think tank Centre for Strategic and International Studies (CSIS), Kurt Campbell said America and its allies are looking at India as a country they want to draw more into the Indo-Pacific.

Emphasizing India's geo-strategic location and geo-political importance, Campbell on Thursday said that New Delhi will be the focus of Washington's diplomacy in 2023 while envisioning a network of partnerships in the Indo-Pacific.

Indo-Pacific Coordinator said that America's traditional "hub and spoke" model of alliances -- a collection of bilateral agreements with the US at the centre -- is shifting to a new phase, which will be a network of alliances and partnerships. As a member of the Quad --along with the US, Japan and Australia -- and as this year's president of the Group of 20, India is expected to be the focus of US diplomacy.

The deputy assistant to the US President hinted at more Presidential and Vice Presidential visits to the region, saying that one of the most essential algorithms of Asia is "the importance of showing up.”

"We've got a lot of things that we're planning for 2023, active travel in the region," he said. The G-7 summit in Hiroshima, Japan, and the Quad summit in Australia, both in May, along with the G-20 summit in New Delhi in September are candidates for President Joe Biden to fly out. Biden will host the Asia-Pacific Economic Cooperation meeting in San Francisco in November.

Campbell also said that the US is ready to assist India to diversify from its reliance, largely on Russian military supplies. We work closely with a number of like-minded nations, that also seek that goal," he said.

On his most recent engagement with Indian officials last autumn, Campbell said that their viewpoints and interests were so similar that, "We could have exchanged our talking points."

Other panellists at the CSIS forum were also bullish on India. Raymond Vickery, a non-resident senior associate at CSIS, said "India will be growing about 50 per cent more than the Chinese economy," in 2023. "It is either going to be the number one or number two of all major nations in the world. It will grow in 2023 about eight to 12 times as fast as the United States economy or the Japanese economy," he said.

"It is the year of India," Vickery said, pointing to New Delhi's Presidency of the G-20, the Chairmanship of the Shanghai Cooperation Organisation and the hosting of the Global South summit.

Akhil Ramesh, a fellow at the Pacific Forum, said that India offers the US a window into the Global South. "Countries in the Global South are aware of India's strategic multi-alignment and, as a result, seek its leadership in global causes from vaccines to conflict prevention," Ramesh wrote this week in an op-ed.

"From Mexican President Andres Manuel Lopez Obrador to, most recently, Ukraine's President Vladimir Zelenskyy, world leaders have reached out to Indian Prime Minister Modi for a peaceful settlement on the Russia-Ukraine conflict," he wrote.

This week, India hosted the first Voice of Global South summit, bringing together developing countries from Asia, Africa and South America in a two-day virtual summit. Stronger ties with the Global South, through India, will strengthen the US position.