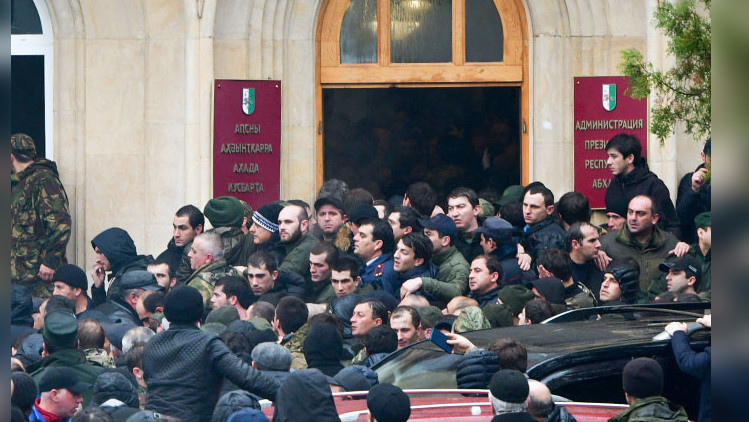 AKIPRESS.COM - Hundreds of demonstrators contesting a local election in Abkhazia have broken into the de facto leader's office demanding his resignation, according to Russian state media.

The crowd on Thursday gathered outside the building in the city of Sukhumi, the Russia-backed separatist region's capital, before breaking down the door and smashing windows to get inside, pictures and footage circulated by Russian state media showed, Al Jazeera reports.

The protesters claim there were widespread irregularities in the re-election of Raul Khadzhimba for a second five-year term as Abkhazia's president in September.

Thursday's unrest came as the authorities were set to review a call by opposition leader Alkhas Kvitsinia to void the results of his runoff against Khadzhimba.

Khadzhimba's office denounced the protest as a coup attempt. The Russian embassy in Abkhazia said it was following the situation.

Later on Thursday, Khadzhimba said in a statement that he did not rule out the possibility that a state of emergency may be declared.

"All state government bodies are operating in the routine mode. The law enforcement agencies have been placed on a heightened state of alert. In case of a need, I will take measures to impose a state of emergency in the country," he said.

"We have already discussed such development of the events with the security council," Khadzhimba said.